Since the dawn of the atomic age, scientists have been working on concepts and technologies to harness fusion reactions–the same reactions that fuel the sun–to produce usable power here on Earth. Fusion power plants could be operated without producing atmospheric pollutants, and without creating the radioactive spent fuel that occurs as a result of fission based nuclear technologies. Most concepts focus on what is called the Deuterium-Tritium reaction (D-T for short, see below). The probability of fusion of these two isotopes is highest at lower energies than other reactions making it attractive to scientists. It is also helpful that deuterium can be collected from sea water and a working fusion power plant would be able to produce its own tritium! 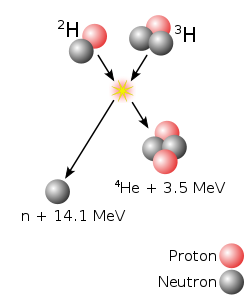 Reactants and products of the D-T Reaction. Image Credit: Wikipedia

While these reactions would produce lots of energy there are still many challenges to fusion energy. The D-T reaction produces high energy neutron radiation that is harmful to humans and equipment. Shielding has to be put in place to protect plant operators, sensitive equipment, and the general public from the radiation. To create these fusion reactions in the first place, the plasma must also be heated to temperatures hotter than the center of the sun–far hotter than the melting point of any known material. As a result heating, and controlling the plasma is also a core challenge that scientists are working to solve.

A number of concepts have since been proposed and tested to solve just that problem. The first method is called Inertial Confinement Fusion. In these designs, lasers (like at the National Ignition Facility at Lawrence Livermore National Lab) or intense magnetic fields (like in the Z-Machine at Sandia National Lab) are used to crush a pellet of deuterium and tritium while heating it. This results in very high temperatures and densities where fusion can occur. This superheated plasma exists only for a small time and is confined by the inertia created by the outer layers exploding under the intense heating they are undergoing, hence the name. In addition to potential energy applications, ICF experiments can be used to probe the most extreme forms of plasmas at high temperatures and high densities. Experimental results can be compared to complicated computer codes that are used to model everything from supernovae to nuclear weapons. 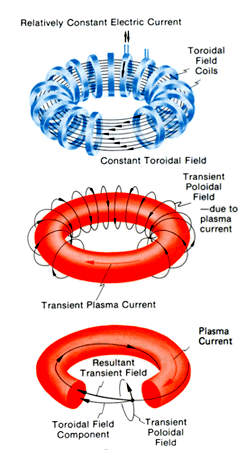 While the first tokamaks had circular cross sections (like in the image above) more modern tokamaks now use a cross section that is more D-shaped. The largest tokamak currently being built is the ITER* experiment in France. Here in the United States, there are several large tokamak experiments. DIII-D* is the largest operational US based tokamak, located in San Diego. Here, experiments are carried out to assist scientists in optimizing future fusion power plants. The National Spherical Tokamak Experiment-Upgrade (NSTX-U)* and the UW-Madison Pegasus Toroidal Experiment* are both “spherical tokamak” geometries–where the device looks more like a cored apple than a donut. These designs allow higher plasma pressures to be maintained with lower magnetic field strengths. An alternative confinement scheme is what is known as a stellarator. While the plasma is once again confined in a loop, the magnetic fields are bent and twisted such that the net force on a particle over one orbit of the device is zero. This helps to eliminate some of the instabilities that can occur in tokamaks. A schematic of the magnetic coils (blue) and plasma (yellow) in the W7-X stellarator. Image Credit: Max-Planck Institute for Plasma Physics

Stellarators have seen a resurgence in research interest in the last few decades and there are now several large scale experiments all over the world. Wendelstein 7-X* is the largest of these devices and is located in Greifswald, Germany. The Large Helical Device* (LHD) in Japan and the Helically Symmetric Experiment* (HSX) here in Madison are two other stellarators where research is being done to explore the stellarator design as a possible basis for a fusion power reactor.

* UW-Madison Faculty, Scientists, and Students are involved in research efforts on all of these devices. Several of them are even on campus. If you’d like to learn more about our work, checkout the UW-Madison Plasma Research Program Page. If you’re interested in getting involved head over to our page for Prospective Students.